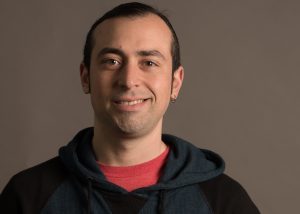 The image of the apolitical scientist is a relatively new one, though one that has become entrenched in the popular conception of what a scientist should be: impartial, dispassionate, and motivated by reason. Recently, however, this image has begun to shift. For many researchers the scientific and the political are once again becoming inextricable — the current political climate has necessitated melding the two. Joshua (Shua) Sanchez is devoted to both science and activism, managing to balance his graduate work in solid-state physics with organizing for and serving on the graduate student union, UAW 4121.

Shua is studying solid-state physics with Dr. Jiun-Haw Chu, studying superconducting crystals: materials with no electrical resistance once cooled to sufficiently low temperatures. Passing a current through a typical conducting material results in loss of some amount of energy as heat; the use of superconductors, however, avoids this energy loss. Superconductors have a myriad of applications, such as in MRIs, electronics, and particularly in energy storage. “Energy storage is a super hard problem for sustainable energy sources, such as solar panels,” Shua says, “Since the sun isn’t shining at night, all of the energy needs to be stored, and currently the way we do that is with chemical batteries, which isn’t the most efficient way to do things.”

Shua is trying to understand why superconductivity happens, and what properties crystals need to have in order to be superconductors. Shua works with different types of crystals that are anti-magnetic. While most materials are weakly magnetic, some materials possess the property of anti-magnetism, in which the magnetism within the crystal cancels out magnetic fields applied to them.“We know that [superconductivity] is linked to suppressing magnetism,” he says, “so I’m trying to figure out why suppressing this magnetism, cooling these crystals, and putting pressure on these crystals, improves their superconductivity.”

Even as a child, Shua knew that he would have a scientific career. Shua talks about science like a close relative, rather than a career or something that he discovered along the way. “When you’ve been with someone for so long you learn to love them in new ways,” he says of physics.

I asked Shua when his career as a scientist began. “Well, in 1846 the United States invaded Mexico,” he begins. Shua identifies as Mexican-American — his father is an immigrant from Mexico. “My dad loved science. He didn’t get the educational opportunities that I think he should have had.”

Despite not being able to pursue science, Shua’s father was one of the driving forces for fostering Shua’s interest in science. Shua says that he and and his brothers were raised on a steady diet of the Discovery Channel and National Geographic.

Shua’s decision to study physics at the University of Wisconsin-Madison, seemed natural and inevitable. He started his freshman year as a physics major, but halfway through became convinced that he wasn’t good enough at physics to get a physics degree, so he switched his focus to neuroscience. As an undergraduate, he worked in a human cognitive neuroscience lab, studying sleep. He studied sleep issues in people with depression, insomnia, and parasomnia, trying to answer the question: “What is different in the sleeping brain of people with these illnesses?”

Still, Shua never actually left the physics major. “I just never got around to switching out, and as I got closer to the end of the degree I just decided to finish it.”

After graduating college, Shua worked on Democratic political campaigns in Texas, North Carolina, and Illinois. Shua is now an active member of the University of Washington’s graduate student union, UAW 4121. Shua has been involved in some form of political activism each year since 2010. He canvassed for the 2012 and 2016 presidential elections, for Obama and Clinton, respectively, registering voters and recruiting volunteers.

Shua can pinpoint the moment that solidified his commitment to political activism: the 2010 Wisconsin midterm general election.  “I didn’t vote in the 2010 primaries in Madison. That was the Tea Party wave when tons of college students didn’t vote. The Tea Party took over and all sorts of bad things happened…Pregnant women lost health coverage, there were massive, massive cuts to the education system. Plans for the light rail got scrapped. The result came as kind of a shock, especially since I’d been volunteering on getting a light rail system in place, but I didn’t even vote when it came time for the governor’s race.” In 2010, Republican Scott Walker ran a successful campaign against the Democratic incumbent Jim Doyle, who had plans to connect downtown Madison to Milwaukee and Chicago via rail. Walker ran his campaign with promises to “stop the train,” and went on to prevent the station from ever being built. The Republican-controlled legislature went on to halt many public transportation initiatives in Wisconsin and strip public-sector unions of their bargaining power. “From that point forward there has not been a single year where I haven’t been involved in a political campaign in one way or another,” Shua says. “That took me from not participating to doing what I do now.”

Shua spent much of the past year coordinating a six-month contract campaign for UAW 4121. Every three years, UAW 4121 and the UW administration bargain to replace their current agreement, which was last set to expire in April 2018. The contract covers a variety of working conditions, from wages, accessibility, and healthcare, to appointment security and sexual harassment protections for academic student employees (ASEs). UAW 4121’s bargaining committee consists of graduate students from various disciplines who, while completing their graduate work, make time to fight for a fair contractual agreement between the administration and graduate students. Shua was an elected member of the bargaining committee and represented the interests of ASEs in the Physics, Astronomy, Atmospheric Science, and Biology departments.

Shua was an integral part of the at-large bargaining team throughout contract negotiations. In addition to organizing rallies and attending eight hour bargaining sessions, Shua was tasked in engaging the rest of the graduate student population in the bargaining process as well as representing their interests. Shua canvassed academic building to academic building, asking graduate students to come to rallies or sign up for the union. During the bargaining campaign, the UW administration was unwilling to accept many of the graduate students’ demands, including trans-inclusive healthcare, language to protect ASEs from harassment and discrimination, and an increase in wages, resulting in a series of rallies and a one-day strike. UAW 4121 saw historic turn-out from ASEs throughout these events, and in the end won fully trans-inclusive healthcare, mental health coverage, sexual harassment trainings run and developed by graduate students, and the implementation of climate surveys. “But I didn’t do anything,” he insists, “It’s what we did. What we won absolutely required the majority participation of the graduate student population.” UAW 4121 is continuing to organize and plans to fight this year to enforce the current contract and to improve transit equity for UW employees.

Shua says his commitment, at its root, comes from a desire to make science education accessible to everyone. Living in Seattle, Shua sees the rampant inequality that exists due to the high cost of living. “Whenever I walk to the light rail from my apartment in Capitol Hill there is at least one homeless person sleeping on the sidewalk. People are getting priced out of the city, and 80% of graduate students pay s third or more of their income to rent. I think a lot about my dad. He grew up really poor. He didn’t have the best educational opportunities. He had to deal with a lot of racism in the 70s and 80s. I think that he would have been a really good scientist. There are a lot of poor people and people of color who would make great scientists, but they can’t because of the way our society is structured.”

Following the 2016 election, many scientists have felt the need to get more involved in political activism. I asked Shua what he thinks the role of scientists in the political sphere is.  “I think a lot of scientists think that the appropriate way to do activism is through science outreach, which is really important, but it’s not everything,” Shua says. “Activism can be union-based and political too. It’s hard to dislike a scientist. We have a lot of privilege in our ability to introduce ourselves as scientists. You automatically have some credibility just by virtue of the field that you’re in, so anyway you choose to use that, you have some influence.”