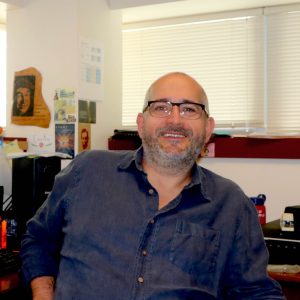 How are connections between neurons in the brain, called synapses, formed and maintained? How are they modified by experience, and what can thesemodifications tell us about the molecular basis of learning and memory? These are questions that have long occupied Dr. Andres Barria, an Associate Professor in the Department of Physiology & Biophysics. Dr. Barria wants to understand how proteins called NMDA receptors contribute to both normal and pathological synaptic function, and how these receptors are regulated.

“My interest in synaptic physiology started while I was an undergraduate studying biochemistry in Chile,” said Dr. Barria. “We started talking about the nervous system in class, and specifically about cell membrane receptors – things that capture a chemical compound in the environment and cause changes within the cell.” A classmate pointed him to an article in Scientific American that argued memory could be explained in terms of molecules – proteins, enzymes, and receptors.

“I was fascinated by the idea we could understand something as complex as memory from a molecular perspective,” said Dr. Barria. As he progressed through his undergraduate education, he found himself enjoying lab work and the academic freedom of the university setting, and decided to pursue a career in science.

When he started his PhD program at Universidad de Chile, he knew he wanted to study synaptic receptors and long-term potentiation (LTP), the process by which connections between neurons are strengthened. When he realized there were no labs at his home university focused on this topic, he began reaching out to investigators outside of Chile. Eventually, he landed in the lab of Tom Soderling at Oregon Health Sciences University, where he made discoveries about synaptic proteins called AMPA receptors that are now key to our understanding about how LTP works. From there, he completed a postdoctoral fellowship at Cold Spring Harbor Laboratory before joining the faculty at UW in 2005, where his lab continues to study synaptic physiology.

These days, his lab is interested in the FMRP protein, which is associated with autism when mutated. The mechanisms underlying this relationship remain unclear, but Dr. Barria noticed that mutations in FMRP also alter the expression of NMDA receptors, a hint that changes in synaptic function may contribute to the complex symptoms of autism-spectrum disorders.

“The FMRP model is an attractive system to test some of our hypotheses about NMDA receptors being critical for synaptic function,” said Dr. Barria. “When you don’t have functional components of the synapse, it makes sense that you don’t end up with a functional neural circuit that can support higher cognitive functions.”

When asked about the most rewarding aspects of his job as a professor, Dr. Barria emphatically states that it’s his students.

“One of my biggest satisfactions is seeing my graduate students finish their dissertation work and progress to the next stage of their career,” said Dr. Barria. “Lately I am thinking a lot about my contributions to training the next generation.”

As a native Chilean pursuing a scientific research career in the U.S., Dr. Barria has faced formidable obstacles. When he first arrived in Oregon, Dr. Barria spoke no English. He described an experience with his graduate mentor in which they had to diagram experiments they planned to perform because of the language barrier.

“This issue of being a minority, being a foreigner in a foreign land – I’ve had to fight some heavy battles,” said Dr. Barria. “I want to share my experiences with people and let others know that it’s possible, to open doors for new trainees to do the same.”

In addition to communication struggles, Dr. Barria often encountered negative stereotypes as he progressed in his career.

“I found that Americans often have a narrow view of what Latinos can do and offer, and I had to fight a lot of stereotypes. For example, when people thought I would always be late because I am Latino, I felt I had to make an extra effort to always be early, and that was unfair,” said Dr. Barria. These experiences have influenced his approach to social justice and how he advises the next generation of scientists.

“As an underrepresented minority, it’s important for us to fight for equal representation. But every time we open up a new space, that comes with responsibility,” he said. “This is something that people of privilege don’t realize. Even when you make the field more even for everyone, you still have to keep fighting stereotypes so that the space keeps growing for everyone.”

Dr. Barria’s commitment to social and political justice has deep roots. As a child, Dr. Barria and his family were exiled from Chile during the dictatorship of Augusto Pinochet. As a result, he spent parts of his childhood in Argentina and Venezuela, before finally returning to Chile for college in 1985.

“When I first got to the university, the government had just eliminated all student-led organizations, which had a strong tradition of political involvement. They knew that to quiet dissidents, you had to target the student population” he said. “Still, they were working to reform, and I was eager to join them.”

Despite their efforts, several leaders of student organizations were facing jail time, political exile or in hiding from the police. Dr. Barria pointed to a poster hanging on his wall which reads “Por la paz…libertad para los estudiantes” – translated, “for peace…freedom for the students.”

“We would go out at night and hang those posters around the university and in the streets,” said Dr. Barria. “I kept one after all of these years and hang it in my office because that’s what I am – it’s what gave me my conviction and made me fight for what I believe in. It’s why I’ve spent time living all over the world, and why I have this commitment to political justice and democracy.”