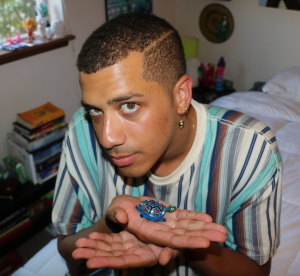 Chronic stress is an all-too-prevalent problem that can increase the risk of conditions ranging from heart disease to diabetes. Recently, neuroscientists have been gathering evidence that chronic stress has detrimental effects on decision-making, a finding with important implications both for understanding the brain, and for understanding how societal factors that lead to chronic stress (e.g., socioeconomic status) can alter decision- making. This idea drives the research of Rapheal Williams, a PhD candidate in the UW Neuroscience Graduate Program. In the lab of Paul Phillips, Rapheal seeks to understand how chronic stress affects the release of dopamine in a brain area called the nucleus accumbens, and why this leads to changes in decision- making. He’s especially interested in how these changes may manifest differently in male and female brains, and how chronic stress and decision-making relate to psychiatric disorders like major depression.

“The hypothesis is that chronic stress can contribute to the causes of major depressive disorder,” Rapheal said. “People with treatment-resistant depression are often simultaneously experiencing chronically stressful circumstances.”

Rapheal hasn’t always known that he wanted to study the brain. When he began undergraduate coursework at Georgia State University, he majored in computer science, but quickly realized he was more interested in understanding human behavior. Raphael says that his experiences with high school peers struggling with addiction were a catalyst for his interest in decision-making.

“I became interested in how drugs work to affect behavior,” he said. “I knew some people who would have exposures to drugs and turn out just fine, and others who would become addicted and even die of overdoses. I wanted to understand individual differences in addiction, and especially why people relapse.”

After becoming one of the first students to join the Neuroscience major at Georgia State, Rapheal got involved in undergraduate research in the lab of Dr. Kyle Frantz. There, he studied how addiction propensity changes during adolescence, and circumstances leading to relapse. Over time, his interests evolved to include not only addiction, but the neural basis of personality traits present in many people who become addicted to drugs, such as impulsivity and high susceptibility to stress. This led him to his current focus at the nexus of stress and decision-making, but he’s already starting to think even bigger.

“Ultimately my goal is to understand not only how chronic stress affects decision-making, but the impacts of impoverished environments more broadly on decision-making and motivated behaviors,” Rapheal said. “There are so many aspects to poverty – food insecurity, stressful circumstances, hereditary factors, and most importantly, socialization.”

While he recognizes that the biggest impact of his current research lies in helping the neuroscience community to answer basic questions about brain and behavior, he hopes research like his will one day have and impact on how we understand and discuss issues of structural inequality.

“I hope this kind of work will eventually impact the way we see impoverished people, particularly when it comes to our legal system,” Rapheal said. “Why are some groups of people more likely to commit crimes, to end up in the system? A lot of it comes down to resource inequality and lack of basic comforts.”

As a first-generation graduate student, Rapheal’s path to academic success was not always straightforward.

“Growing up, my family didn’t have much money, and I had to switch schools a lot,” he said. “No one ever told me the things I’d need to do to prepare for an academic career, I just went to college because I figured I’d be better off than if I didn’t. When I got in, I had to work a lot harder than many of my classmates that had more background knowledge from their high school classes.”

Rapheal said he often feels like the lack of educational opportunities he faced as a person of color, and his experience with socioeconomic disadvantages, still impacts his career trajectory. When he got to graduate school, he realized he wanted to help other students who face similar struggles.

“I was lucky to have people in college who helped me get to where I am today, who taught me to think and behave like a scientist before I ever got into graduate school,” he said. “Ultimately, I want to give back and help people in my community realize their potential.”

Outside the lab, Rapheal works as an outreach and recruitment representative for the Graduate Opportunities and Minority Achievement Program (GO-MAP), where he talks to prospective students of color about graduate education and works to increase diversity in graduate recruitment at UW. He wants to start visiting underrepresented students in high schools and colleges to let them know that it’s possible for them to pursue a graduate education, too.

“As a black man in neuroscience, I see how important it is to increase black representation in the sciences. It can be unsettling to walk through the halls and realize there isn’t anyone else that looks like you,” Rapheal said. “Even knowing where I stand now in the neuroscience community, I still think a lot about how my peers and mentors interact with me. I sometimes feel judged, and thought of as being less able than some of my counterparts.”

When reflecting on how to best advise other students of color struggling with these issues, he stressed the importance of resilience and self-confidence, even when fighting seemingly insurmountable obstacles.

“If you want to make a change, it gets much more difficult to actually do it if you start believing that you can’t,” he said. “If you’ve made it this far, you’re an even more valuable resource to your community than you realize. Your perspective is priceless.”

Rapheal credits his own resilience to a series of strong female role models, first in his family, and then in the lab.

“It’s cliche, but my biggest inspiration is my mom,” he said. “She’s been through a lot, and watching how hard she worked as a single mom, working simultaneously as a firefighter, an EMT, and a model was so inspiring for me.”

“The star of my undergraduate experience was my first PI, Kyle Frantz. She is an absolute superwoman in science,” he said. “She picked me apart and put me back together as a very curious and able scientist. When I was with her, I never doubted my abilities, and I never doubted that I’d be able to make it in science.”

Despite her busy schedule, Rapheal recalls Dr. Frantz not only being available for feedback in the lab, but dedicating time to advocating for women and people of color in science, something he now seeks to make an integral part of his career.

“Seeing her drive for social justice inspired me. I really looked up to her and want to be able to do that for people in the future,” he said. “Now I draw inspiration from peers and mentors working to make changes in their own communities.”

While looking back on his academic journey, Rapheal holds a small, painted turtle given to him by a high school counselor who helped him get into college.

“This symbolizes the experience I had growing up. It represents the hard shell people of color are forced to create to be able to get through life,” he said. “Progress is never going to be a fast-paced thing. Some turtles might get lucky and crawl into a catapult that slings them forward, but mostly, it’s a slow and steady race that you have to take day by day.”