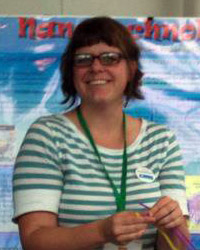 At a recent talk for our group, Joan Bleecker was introducing our speaker, Professor Sarah Keller, and stated that she was a wonderful “template for a woman in science”.  Since that time, and throughout the fledgling stages of this group, I have been thinking a lot about what characteristics make for a good template and how I have seen them in my own life.  The answer for me was, literally, close to home.

I was very fortunate to have my mother be the first, and arguably, most profound example of a strong female in the sciences in my life.  Receiving her PhD in Engineering Mechanics from the University of Wisconsin, Madison she went on to work at Sandia National Labs in Livermore, CA where I grew up.  She worked with scientists at Stanford on something called a “holographic drilling technique for measuring residual stress,” she has three patents through research she did at Bethlehem Steel and she was president of the Society for Experimental Mechanics.  Yeah, my mom is pretty cool.

Beyond her scientific achievements, my mom also started a program, Science Understanding Promotes Environmental Responsibility (SUPER!), which combined local middle and high school teachers with educational specialists from the California Department of Education and Lawrence Hall of Science in a month long training program.  The idea behind this program was to use environmental issues to teach educators a hands-on approach to science education.  She was also active in the Expanding Your Horizons Conference, from which I still remember how to build the strongest bridge out of tinker toys (triangles!).  Did I also mention she is a painter, above average bowler and pretty much the toughest person to beat in any strategy game around?  I have, in fact, still never beaten her at Tetris.

Ok, yes my mom is super amazing…  But, the point here is not to brag about her (though I could go on and on) so much as to reconstruct some of the ways growing up she gave me positive messages about being a woman in the sciences.  One major lesson I learned from her was that you have to learn things for yourself.  Having the drive to go out into the world and ask questions is so important.  At a very young age, if I wanted to know about something on the menu at a restaurant she would encourage me to ask the waitress.  Anytime I had a question about how something worked, she would point to our encyclopedias (remember the blue World Books?!) and instruct me to look up the answer.  More importantly, there would be a follow up discussion that involved questioning what I thought about something, or what that thing really meant.  I had to convince myself of the answer, not just take it at face value.  And most importantly, communicating your ideas was of paramount importance.

Another huge lesson was about perseverance.  This one I really took to heart.  My mom told me many stories about how she became an engineer.  This was a pretty big deal considering she was one of the first women to graduate from her department at Madison and the first person in her family to attend college.  She had always wanted to study science and math but people had told her repeatedly that, “Women could not be engineers.”  She never had a female scientist as a role model telling her that, of course, those naysayers were wrong.  After trying out every other major (literally), a year abroad in Japan and a failed attempt at being a secretary she decided, “No, I still think I want to be an engineer.”  She managed to transfer from the small university in Indiana she had been attending, to Madison where she finished up her undergraduate degree (BS in Applied Math, Engineering and Physics… I said I could keep bragging) and went on to get her PhD.  She put herself through university and kept pushing the boundaries of gender stereotypes at the time.  She also told me these stories, repeatedly, to hammer home the point that I should never settle for what someone else thinks of my abilities.   One of the best lessons I have ever learned is: Don’t let anyone convince you that you are not good enough.

I, of course, was lucky enough to have a female scientist as a mom and role model growing up.  However, it can still be incredibly difficult to unwaveringly believe in your abilities all the time.  For those that were not fortunate enough to have someone that was on the sidelines, cheering them on, this can be especially difficult.  I believe this group, and others like it, are so important for fostering that conversation and mentorship both through role models and each other.  Sharing stories, both triumphs and failures, helps to strengthen the idea that we do have the ability to pursue our careers.  Listening to how others overcame adversity and made the decision that science was a passion worth pursuing is so important.  The best part about this is being able to have these stories resonate with each successive generation and figure out where we still have to go.

I end with a short anecdote about how a strong role model can have a profound influence very early on in life.   The greatest proof of this took place at my kindergarten graduation where all the children got up and said what they wanted to be when they grew up.  After a “ballerina” and “fireman” before me, I boldly stood up and announced that I wanted to be, “an engineer”!  Now, there was no way I had any clue what I was saying but I knew that was what my mom did and I wanted to be just like her.  Funny how those things don’t really change.

With that, I just want to say that I am looking forward to all the future events and outreach efforts our group has planned.  With the participation of folks in the UW community and beyond we can keep the dialogue about women in the sciences going!

Thank you for your interest and participation!

Women in Chemical Sciences at University of Washington

3 thoughts on “Thoughts on Women in Chemical Science: A Welcome Message from the President”