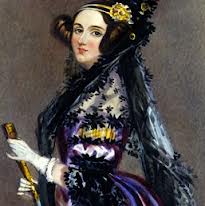 Augusta Ada King, Countess of Lovelace was another such inspirational woman.  Commonly known as Ada Lovelace, she was born December 10, 1815 to the Byrons:  renowned poet Lord Byron and his wife Anne Isabella Milbanke.  When Ada was barely a month old, Lord Byron separated from his wife and moved away.  Ada’s mother feared her daughter would inherit her father’s poetic romanticism and volatile temperament, which was likely the result of bipolar disorder. So, in order to root out any possibility of “insanity,” and contrary to the fashion of the time, Ada’s mother had her privately tutored in mathematics, science and logic.  It was not until the age of seventeen when Ada’s mathematical genius began to emerge, and despite the fact she never knew her father, she called herself a “poetical scientist.”

Ada is most famous for her work with the British mathematician, Charles Babbage, on his Analytical Engine.  The Engine consisted of punch cards with circular holes as data input placed into mechanical looms.  These input cards were how the Engine was programmed to do simple calculations, including trigonometric functions and logarithms, as well as more complex actions. A primitive printer was also attached as an output device, while the Engine was also capable of punching output cards for later reading.  Ada is responsible for the transcription of many of Babbage’s notes as well as the translation of Luigi Menabrea’s work on the engine from Italian to English.  Many debate whether Ada’s work was merely secretarial, but most insist it was she that understood the potential of the Analytical Engine to do more than simple calculations.  She insisted the engine could be programmed to solve problems of greater complexity than simple number-crunching.  Scholars credit her with writing the first computer program, an algorithm encoded for processing by the analytical engine of interest.

Unfortunately, before she could see the completion of the Analytical Engine, Ada died from complications due to uterine cancer at the age of thirty-six.  However, her legacy lives on.  The United States Department of Defense named a computer language created specifically for them, Ada, in her honor; and the British Computer Society has both a metal in her name and an annual competition for women students of computer science.

Today there exists an international “Ada Lovelace Day,” often celebrated in the mid-October.  The website findingada.com summarizes it nicely:  “Ada Lovelace Day is about sharing stories of women — whether engineers, scientists, technologists or mathematicians — who have inspired you to become who you are today. The aim is to create new role models for girls and women in these male-dominated fields by raising the profile of other women in STEM.”  The site encourages others to form Ada Lovelace Day parties around the world on whatever day works best to raise awareness and inspire other young women to engage and explore the STEM fields.

The motives of Women in Chemical Sciences and the University of Washington encompass the goals of Ada Lovelace Day.  I encourage you to consider participating in future Ada Lovelace Day and Ada Lovelace Day-type events, including those at UW in the coming year.  Reflect on the women—whether they be scientists, athletes, adventurers, or just friends—that inspire you to believe you can do, be, study or explore whatever you desire.  Share with others those experiences that led you to choosing a field of study in a STEM field, the adversities you faced, and how you overcame them.  And remember Ada, who in a time where women just didn’t do math and science, overcame others’ expectations and saw past a simple engine to foresee a computer.

One thought on “Augusta Ada King, Countess of Lovelace By Brooke Reaser”