Geri’s visit to UW focused on meeting with students, and we all learned a lot from her. The morning started with a COACh workshop on “The Art of Effective Negotiation” (stay tuned for a separate recap of the workshop and an upcoming follow-up event), followed by a lunch discussion on the representation of women in our department and the role of our student group (stay tuned for ways to get involved with some new projects – we’ve got some exciting new ideas). The lecture itself was followed by a reception and celebration featuring great food and drinks plus plenty of selfies, by Geri and others.

The centerpiece of Geri’s visit was the lecture itself, during which she shared her career path, experiences, and advice. One of four sisters, she 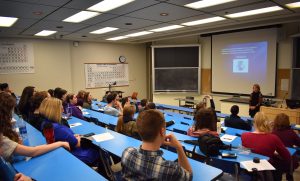 grew up on a farm in Kansas, and later worked in her family’s clothing store to pay her way through college at Kansas State University, where she initially majored in math. After acing a chemistry test, she was offered a job in the chemistry department and switched her major. A research internship at Lawrence Berkeley National Lab played a big role in her decision to attend graduate school at UC-Berkeley, where her advisor ended up spending most of his time working for the NSF in Washington DC (but also taught her the value of education, work-life balance, and service to the community, which she strives to pass on to her students today). After considering some industry jobs, she applied to teaching positions at small liberal-arts colleges, despite having taken only three liberal-arts courses as an undergrad (“Witchcraft and the Occult”, “Sex and Politics”, and square-dancing). As a professor at Bryn Mawr College in Philadelphia, working with students and doing research reignited her interest in science. After a few years, she started looking for a professor position at a more research-focused institution, along with her husband, who was working as a physicist at Bell Labs. They both ended up getting positions at the University of Oregon, drawn by its interdisciplinary research focus. Since then, Geri has managed a successful research group, as well as founding COACh and getting involved in domestic and international science policy.

Several questions during the Q&A addressed Geri’s policy work, which has involved many roles on different levels. Internationally, the iCOACh program offers career-building workshops for scientists in developing countries, created based on their specific career needs. Some topics, like negotiation and leadership, are universally relevant, but others, like publishing and proposal writing, are aimed specifically at researchers in countries with fewer resources for getting their science out on the world stage. COACh also seeks to build networks of women scientists in various countries, centered around research topics like natural disasters and clean water. Besides COACh, Geri has been appointed as the US Science Envoy to the Lower Mekong River region (Thailand, Cambodia, Laos, Vietnam, and Burma). She travels there to learn about the unique scientific and environmental needs of the region and build collaboration for science research and education. For students interested in getting involved in science policy, Geri recommends attending AAAS meetings and applying for the AAAS Science & Technology Policy Fellowships. She also addressed the current political climate for science: in her role on the National Science Board and with the AAAS, Geri focuses on persistently advocating for facts without being antagonistic. Her perspective on government research jobs is reasonably optimistic; many sources of funding, including for basic research and defense, will continue.

Throughout her career, Geri has been motivated by working with people and getting to know how they work and think, from mentoring her graduate students to designing COACh workshops to collaborating with scientists all over the world. She was always interested in teaching, but found that she particularly enjoys working with graduate students as they figure out their career paths and develop into independent scientists. While she loves doing science, she feels most fulfilled when she can also go beyond research and participate in the broader context of science. She balances the many demands on her time and energy by knowing which priorities are non-negotiable (in particular, raising her kids) and by not being a perfectionist: knowing when it’s okay to give 90% effort and when it’s absolutely essential to give 100%.

Finally, Geri and others are trying to reframe the conversation around careers in science. Instead of focusing on the “leaky pipeline” model of scientists leaving their fields or choosing “alternative” careers, they view science careers as a path with many possible branches (not only academia, industry, and national labs). Scientists don’t drop out of the pipeline, they follow different branches and apply their scientific skills and education in a wide variety of situations. A background in science can be valuable in any context.

Overall, Geri’s visit was really inspirational, and it was great to hear her story and advice! Thanks to Katie, Beth, and everyone else who organized and hosted her visit.