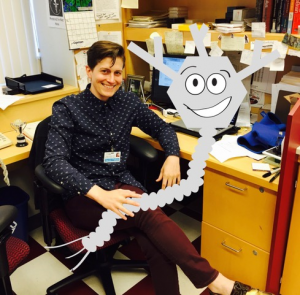 In hindsight, my path looks really linear, but it really was super circuitous. I’ve been all over the place. I guess it started when I was really little and I watched a Nova documentary on sight. I had a really hard time with the concept of colors. When I learned that our eyes are sensing wavelengths of light and assigning the experience of color to that,  I went to my parents and said “How do I know that I’m seeing the same colors as everyone else, if all I’m doing is encoding a wavelength of light, how do I know that my experience of color is real?” That began my deep thinking into neuroscience and wanting to learn how the brain creates experience. This was tied into my early experience with gender in the sense of being told one thing and having a very different experience. Currently, I identify as genderqueer, but I’d been closeted throughout middle and high school.  I learned that having gender conflict is not considered, y’know, normal. I constantly asked questions like “Why is my brain like this? What makes my brain different than other peoples?”

How has your struggle with gender identity shaped your interest in science?

I struggled with that all throughout middle and high school, so initially, of course, I approached science with my gender identity in mind; I had a strong desire to understand how cells work in my brain in particular. I decided to go into biology and engineering but found I liked the biology side better.

What drew you to biology?

I liked the blend of physics, chemistry, biochemistry, cells, and physiology, and connecting the dots from big to little and back to big. It fascinated me to learn how cells communicate. Neuroscience in particular jumped out at me so I took all of the neuroscience courses that I could. I went to undergrad at Colorado State University. I studied philosophy there as well.

My thesis was on free will and neuroscience. The question I tackled was: what does modern neuroscience have to say about free will?

Unfortunately, I had an advisor that did not care about my thesis whatsoever. He fell asleep during my presentation.

Oh yeah. In retrospect, I don’t feel like I had anyone that could really advise me on my thesis topic. I was tackling a lot of the questions that the people that write about neurophilosophy weren’t tackling at the time, or if they were I didn’t know how to find those people. Essentially what people were arguing was you can’t tell if people are going to make these more complex decisions, and I wanted to say “well duh, it’s way too coarse for that.”

What sort of neuroscience research were you doing at the time?

I worked at an occupational therapy lab working with fMRI data. The lab was full of psychology or cognitive neuroscience majors. So I had a lot of things going on at the time. I had the philosophy of mind kind of area, the cognitive neuroscience side, and at the heart of it was this cognitive behavioral fMRI research I was doing. But every time I got the measurements back from the data I collected I wanted to know what’s actually happening inside of the brain that’s causing that change in blood flow at the level of the neurons. You’ve got a change of firing rate in this area, so what’s causing that change? Is it the chemical signals or the hormone signals? I didn’t fully understand the depth and breadth of neuroscience research that was really out there.

How did that realization change your research path?

Well, that junior and senior year I was also really depressed. That’s when I first came out as transgender. I came out slowly. When I started applying to graduate schools, I came out in all of my graduate school applications as transgender. I essentially wrote: take me as I am or don’t take me at all. So, I didn’t get accepted to many schools. The only school that actually accepted me was Washington State University, and they accepted me without a campus visit about a week before the admissions decision deadline. Before knowing where Pullman was and what the school was like, I said yes. I went with the assumption that that was the place where I was going to transition.

We had a transgender professor in the program, and the first day of class I heard my four or five labmates say some of the most transphobic stuff I have ever heard in my presence. Pullman didn’t end up being a safe place to transition. Part of my going there was that it was going to be my time to transition. I think the canonical transition from one gender extreme to another didn’t feel very good, so I decided to kind of stay in the closet and just kept pushing on.

What factors about your environment influenced your decision to stay closeted?

I didn’t fully understand the difference between gender expression, sexual orientation, and gender identity. For me, it was kind of exchanging masculine drag for feminine drag. It felt like this artificial thing that I was doing. Neither extreme felt good, so I was confused about what I was doing because I still felt like I was transgender.

I was really close to dropping out my first year, partly because of the transphobia that was around me, and partly because I had a traumatic experience with my first rotation.

I transitioned to a cellular and molecular neuroscience lab, where we were doing neuronal cultures and looking at how different proteins determine neuronal morphology. For me, that was a much better fit. It’s like solving a puzzle: how does one protein affect the development and morphology of a neuron? What happens to neural networks when you underexpress or overexpress a gene?

What research are you working on now?

I work under John Neumeier, studying stress and addiction. My main project in the lab is to study the regulation of neuronal morphology by the serotonin receptor 5-HT6, which I found is targeted to neuronal primary cilia. I also was integral to establishing the RiboTag technique in the lab to isolate RNA from specific neural networks both in vivo and in vitro.

Now, we use RiboTag in a number of different contexts. I think it would have really helped with the type of research I was doing in graduate school. The problem with trying to understand what specific genes do to a neural population is that if you want to know what happens to a subset of cells when I, for example, knock out a transcription factor, which is most commonly done using a virus, is that viruses really only transfect like 10% of all cells in a culture. With RiboTag, you can look at just the population that is transfected, isolate these cells, and look at all of the genes that are expressed in those cell types.

What are the potential uses of the RiboTag technique?

Well, for example, say you want to understand what the effect of a drug has on transcription of proteins in hippocampal neurons. To do that you find a promoter that is specific to hippocampal neurons, express RiboTag in these neurons, and then you measure the ribosome-associated RNA before and after you deliver a drug. That allows you to figure out whether there are changes in protein expression over time due to an increase in transcription or translation unambiguously.

How has your identity influenced your research?

I became interested in stress personally, because it’s something trans people have to deal with a lot. I identify as genderqueer, but it’s taken me a long time to get there.

Coming out at work was scary. I think being genderqueer has influenced my career quite a lot. It manifests in a lot of different ways.  I can sense that people are uncomfortable with my gender expression and my pronouns. People are awkward around me or will not engage with me. It’s tough because science requires so much collaboration. I mean, I’ve heard before that people don’t really know how to treat me as a genderqueer person. I’ve heard “I know how to treat you as a man, and I know how to treat you as a woman…but…” and I’m like, “Why don’t you just treat me as a person?” I’ve heard a lot of transphobic comments from PIs and potential employers. In addition, there aren’t many genderqueer people in science, especially in power. So that’s taken me a long time to learn to navigate.

If you had any advice for gender nonconforming people who are younger than you, what would it be?

I think it would be…to assess the confirmation bias around you. The people that are your mentors  are the people that it worked out for. I’ve found that the possibilities for my life are beyond that of my mentors. Our imagination and our understanding of possibilities are limited by the things we have access to. If someone told me ten years ago, “You’re going to identify as genderqueer–neither a man or a woman–and you’re going to have a ton of great friends, you’re going to have some great partnerships with a ton of great people, you can be out at work…” I would have laughed in their face. I’m routinely surprised at what I can be surprised about.