This weekend, several members of WCS-UW presented a workshop at the Expanding Your Horizons Conference at Seattle University. This event, which had over 450 attendees this year, provides an opportunity for 6th to 8th grade girls to participate in hands-on workshops and learn about careers in STEM fields. Last year, some of us helped out with supervising the students and directing traffic, but this year, we led our own activity.

In our workshop, students solved a chemistry mystery involving a chemical spill in Lake Washington. They received a contaminated water sample and a note left at the crime scene, and they had to figure out what the contaminant was and which of the four suspects (a pesticide transporter, a corporate executive, an alleged poacher, and a gang of teenagers) was responsible for it. To determine if lead or copper ions were present, they added an acid or a base to the contaminated water, observed whether a precipitate formed, and compared the result to known lead and copper solutions. Students also tested the pH of the contaminated water and compared it to the pH of chemicals confiscated from the suspects. Finally, they used chromatography to determine which of the suspects’ pens was used to write the note found at the crime scene. They shared their results and concluded that the pesticide transporter was responsible for contaminating the lake, with copper cyanide that had leaked out of his truck.

From this activity, the students learned about basic chemical concepts like precipitation reactions, the pH scale, and how chromatography is used to separate components of mixtures. They also gained an understanding of more general ideas that are important to doing science, like the value of doing control experiments and the importance of wearing appropriate personal protective equipment. We also talked to them about what graduate school is and about our own research (lasers and magnets and colors!).

It was fun to see the girls getting excited about their experiments and results, but my favorite question was from a sixth-grader who asked, “Is this real?” We explained that no, we weren’t using real Lake Washington water or solving a real-life mystery…but the science and the experiments were still real, and if there had been a chemical spill in Lake Washington, similar techniques could be used to figure out what happened. The take-home message was that chemistry can be used to answer a lot of different questions! Overall, this event was a really fun experience for us and for the students, and we’re definitely planning to present another workshop next year.

I’d like to thank the Haynes Research Group at the University of Minnesota, where I worked as an undergraduate. We adapted our chemistry mystery workshop from an activity they had developed for an annual outreach event and published in the Journal of Chemical Education, which was a great resource for us. Also thanks to the UW Department of Chemistry for providing funding, and to the Seattle Expanding Your Horizons organizers and sponsors for putting on such a great event. Finally, thanks to all of the WCS members who helped prepare and present the chemistry mystery workshop! 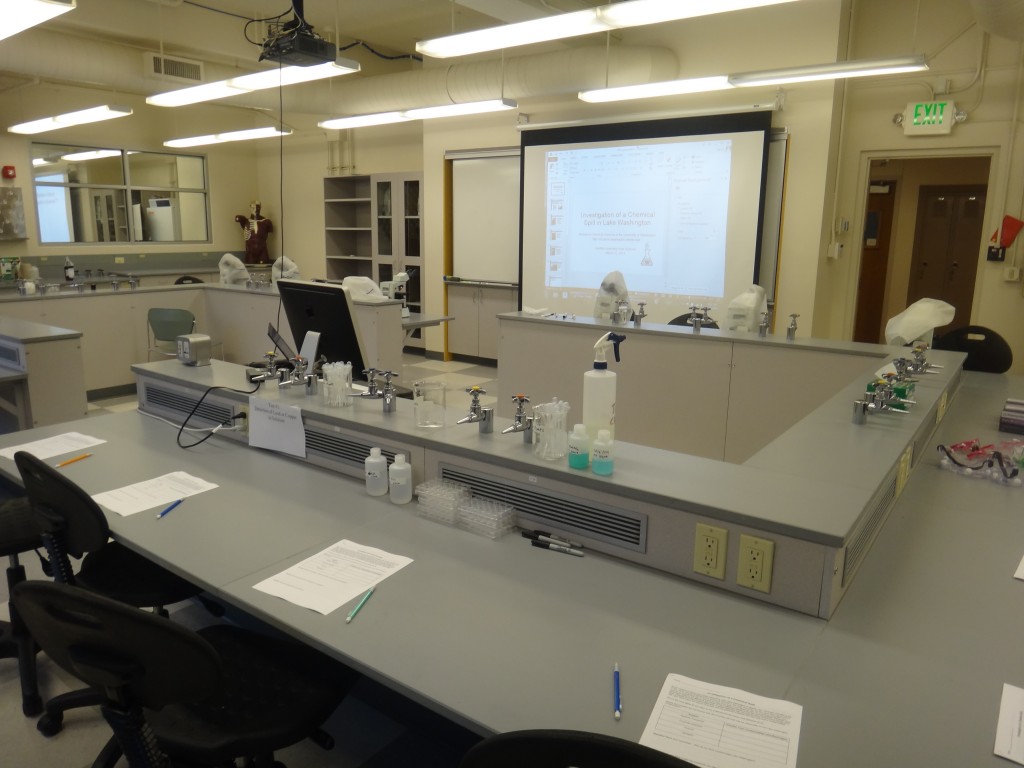 Setting up the workshop in a lab at Seattle University. 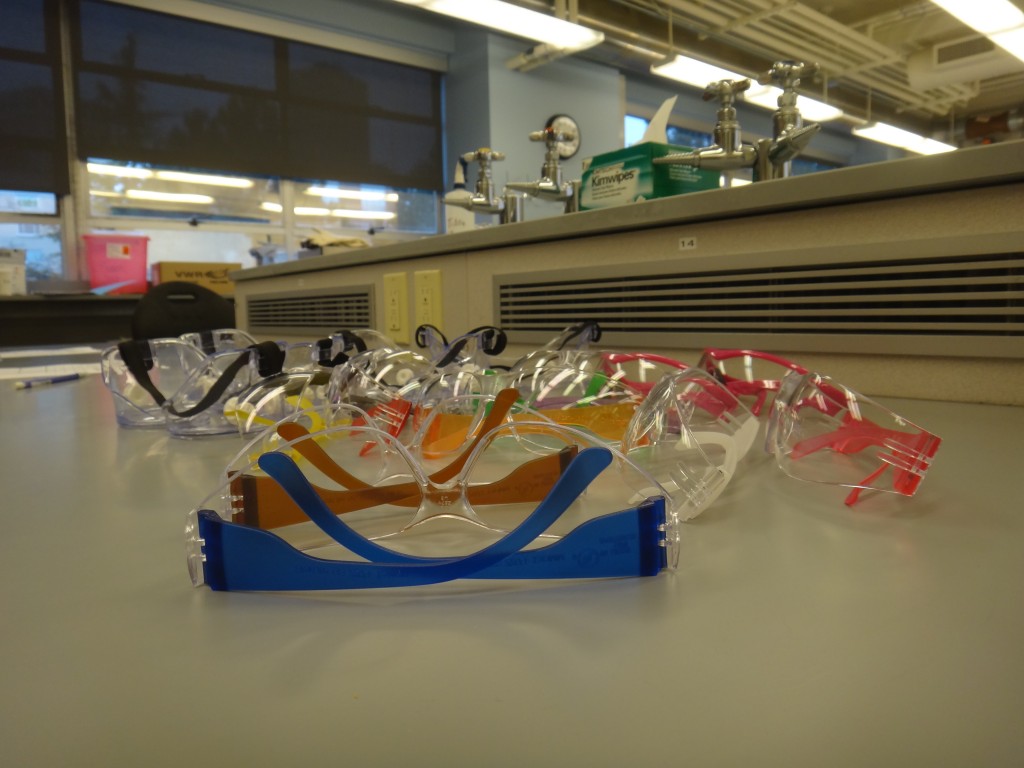 Colorful safety glasses for everyone! 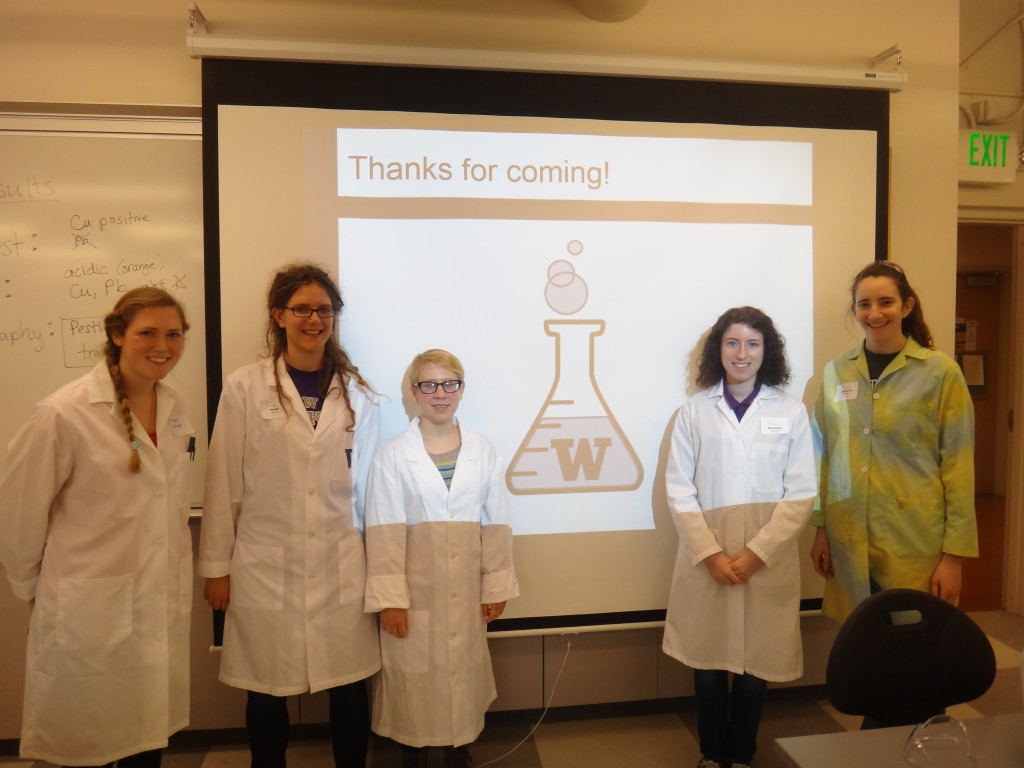 Brigit, Heidi, Jessica, Kim, and Kimberly after a successful workshop.