Warning: "continue" targeting switch is equivalent to "break". Did you mean to use "continue 2"? in /nfs/bronfs/uwfs/dw00/d24/film/wordpress/wp-content/plugins/jetpack/_inc/lib/class.media-summary.php on line 77

Warning: "continue" targeting switch is equivalent to "break". Did you mean to use "continue 2"? in /nfs/bronfs/uwfs/dw00/d24/film/wordpress/wp-content/plugins/jetpack/_inc/lib/class.media-summary.php on line 87
 Retrospective: ‘The Young Girls of Rochefort’ is an Utterly Unique and Unfairly Overlooked French Musical – UW Film Club
Skip to content

Perhaps because they have the capacity to inspire joy and happiness in their audiences, musicals have gained a reputation in high art circles for being purely entertainment: well-crafted, but lacking in emotional depth. The films of French director Jacques Demy defy this elitist categorization of musicals as low art, and they embrace both sorrow and glee to produce a unique and nuanced emotional complexity. In Demy’s work, there is a pervading sense of melancholy, and the difficulties of life are not glossed over in a gratuitous song but form a central theme. While Demy is most famous for his 1964 Palme D’Or winning The Umbrellas of Cherbourg, a tragic tale of the ultimate impermanence of young love, his later films are just as innovative and well-crafted. In particular, 1967’s The Young Girls of Rochefort is an underrated gem of a film, a unique blend of exuberant musical comedy, passionate melodrama, and surreal fantasy that could only have been directed by Jacques Demy.

The Young Girls of Rochefort takes place in the titular town of Rochefort, located in the center of the western coast of France. The titular young girls are a set of twin sisters, Delphine and Solange Garnier, music teachers played by real-life sisters Catherine Deneuve and Françoise Dorléac. Demy had previously worked with Deneuve in her breakout role in The Umbrellas of Cherbourg, and he would later collaborate with her twice more. Deneuve, who at the age of 24, was a busy mother and highly sought-after actress, cherished the time that she was able to spend with her sister, which was made all the more potent by the fact that Françoise died in a car accident a mere three months after the film’s release.

The Young Girls focuses on the romantic troubles of the Garnier sisters, who live near the center of Rochefort with their mother, a café-owner named Simone, and their younger half-brother, BooBoo. “We’re a pair of carefree young things,” they sing, “waiting for the joys that love brings.” They twirl around their music studio, clad in matching pink and yellow dresses, bemoaning the lack of romantic prospects in Rochefort. “Where’s that man who we long to find?” they wonder. As fate would have it, or perhaps, more precisely, as Demy would have it, their men will soon come to Rochefort. 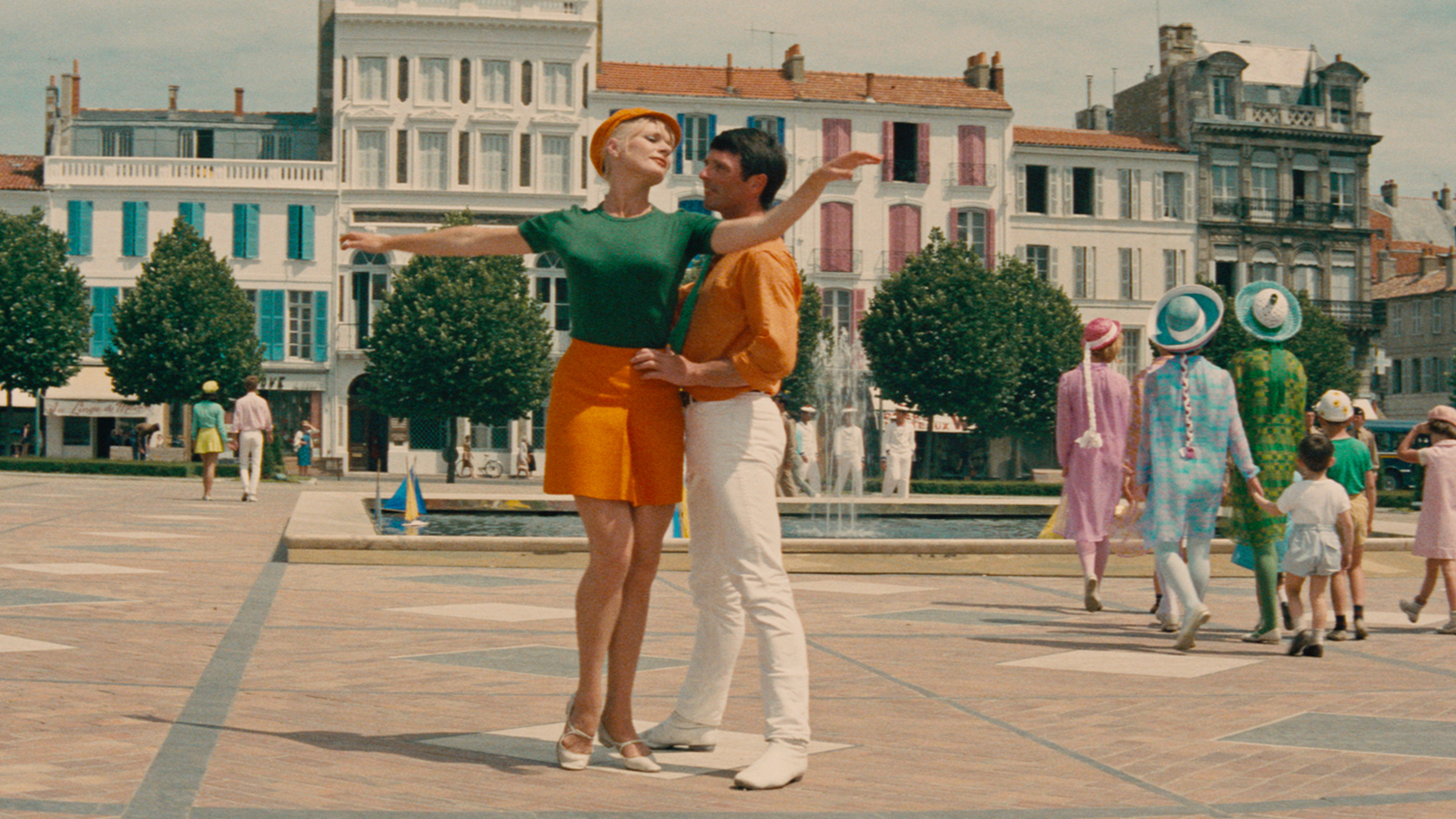 The film begins with the arrival of a traveling carnival that brings to town many romantic prospects. Fans of classic musicals will recognize Gene Kelly in the role of an American composer, and George Chakiris, star of 1961’s West Side Story, as one of the leaders of the carnival troupe. Michel Piccoli (who is perhaps best known for his role in 1988’s Cinema Paradiso) plays Maxence, a sailor who can’t stop painting the face of a woman he sees in his dreams. “Is she far away? Or is she close to me?” Maxence sings solemnly, as Michel LeGrand’s score swells. “I don’t know, but I know that she exists,” he concludes, determined to find his feminine ideal. Of course, in Demy’s world of chance encounters and mysterious love, Maxence’s ideal is, indeed, in Rochefort, but as in all of Demy’s films, the road to love is never easy. The Young Girls breaks its audience’s heart by showing a series of devastating missed opportunities between couples, and then mends your heart when it ultimately brings them together. Such is life: the joy heightened by the struggle that it took to attain.

While shooting during the summer of 1966, the crew painted hundreds of buildings in the town in bright pinks, yellows, blues, oranges, and greens, in order to achieve Demy’s pastel-colored vision. The Young Girls is as visually striking as Umbrellas, but it has more verve, more brilliance, and more carefully choreographed dance sequences. While Umbrellas, with its three-act structure and sung dialogue, could be said to be an opera, The Young Girls, the film follows more closely the model of a traditional Hollywood musical, the type that Chakiris and Kelly were famous for–the type that, by 1967, had all but fallen out of style. And, of course, The Young Girls retains a particular French flair that adds to its sense of charm and whimsy.

The Young Girls of Rochefort hits the right balance of tragedy and hopefulness that very few films are able to achieve. With every moment of happiness or love, there is the threat of its disappearance, and with every instance of desolation or pain, there is the knowledge that life will go on, that a new song will begin, that nothing, not even suffering, is permanent. The Young Girls displays Demy’s unique and ever-present combination of melancholy and euphoria, American commercialism and French provincialism, and the curious relationship between chance and fate. Because of this expert balance, The Young Girls of Rochefort is certainly as good, and perhaps even better than the sumptuous Umbrellas of Cherbourg. At the very least, it demands a re-evaluation, both among film historians and among audience members. This is not a film to miss.